Getting to Know Sparkling Wines

There are a lot of moments that sounds like bubbles. A wedding, a special occasion, your 18th birthday, the day of your graduation… A party is not a party if there is no sparkling wine to cheers with. Once the cork is popped, the celebration is guaranteed. But, do we really know the difference between Champagne, Cava and Prosecco? And how these little bubbles are made?

Sparkling wine is a carbonated wine, with significant levels of carbon dioxide (CO2) in it, making it fizzy and with bubbles.

In the beginning, the base wine is a still wine (with a first fermentation, in which the grape juice has turned into wine), usually with low alcohol content. In order to obtain the bubbles, the winemakers instigate the second fermentation by adding yeasts and sugar to the base wine. In the second fermentation, yeasts will convert sugar into alcohol and carbon dioxide. As the CO2 can’t escape (because is inside the bottle or a closed container), it becomes the famous bubbles.

The carbon dioxide in sparkling wine may result from different ways: a natural second fermentation occurred inside the bottle (traditional method, méthode champenoise), in a bulk tank designed to withstand the pressures involved (Charmat-Martinotti method), or as a result of carbon dioxide injection (as used in soft drinks).

The most traditional method of producing sparkling wines is the Champagne method, when the second fermentation happened in individual bottles. Most expensive than the other methods (because of the aging time, the grapes selection and many other factors), but with a better quality result, in the elaboration process of bottle fermentation every single bottle becomes an ‘individual fermentation tank’.

During the fermentation process, dead yeast cells (lees) form a sediment in the bottle, giving autolytic characters to the wine. Lees have to be removed (maintaining the dissolved carbon dioxide gas). In order to do that, after aging the next step is the process of disgorgement. In the traditional method, the bottle is tilted and rotated slowly (by hand, called ‘remuage’, or with gyropallettes), provoking that dead yeast cells move to the neck of the bottle. This will be frozen and expelled by pressure, opening the bottle. Then, a dosage mixture of fresh wine and sugar is added, determining the sweetness level of the wine at the end.

These wines are less fruity, but their flavours and aromas are more complex: you can find toast, nutty, caramel…This wines are more elegant, smoother and creamier. 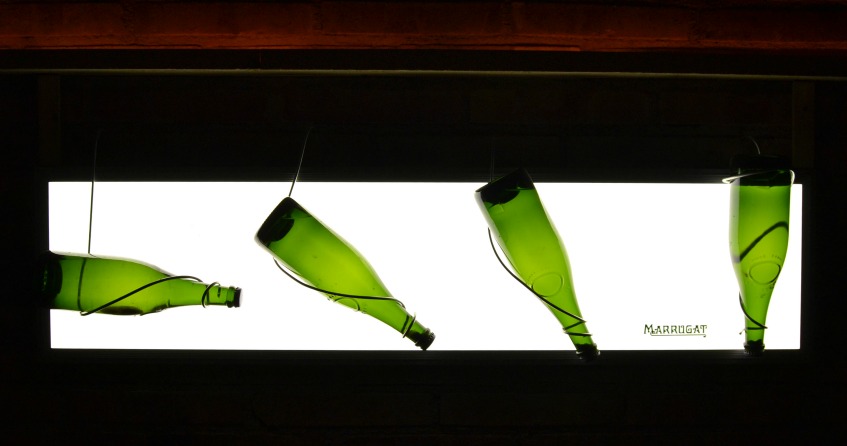 The Charmat-Martinotti method is a quickest way to obtain sparkling wine. Also called the bulk method, tank method, cuve close or charmat method, it consists in provoke the second fermentation inside closed pressurized tanks. Then the carbonated wine is bottled. This wines are less expensive, usually ready for sale sooner and made in large quantities. They are fruitier but with less or none autolytic flavours. Examples of sparkling wines made with this process are Sekt fromg Germany and Prosecco and Asti from Italy.

SPARKLING WINE AROUND THE WORLD

Not all the effervescent wines are called ‘Champagne’: only the ones from the Champagne region of France can claim that name. In Spain, although its used the traditional method, the sparkling wine is called Cava. Most of them is produced in Catalonia, being the most know wineries located in Sant Sadurní d’Anoia (Alto Penedés): Freixenet and Codorniu.

In France, the terms used to refer to sparkling wine (when there are not made in the Champagne region) are “Mousseux” or “Crémant”.

There are many other regions of the world that produce sparkling wines, such as Franciacorta, Trento DOC, Oltrepò Pavese Metodo Classico and Asti in Italy, Blanquette de Limoux in Southern France, Espumante in Portugal and Cap Classique in South Africa. Sekt is the name given for sparkling wines in Germany, Austria, Czech Republic and Slovakia. Also in USA, United Kingdom, Australia and New Zealand are producing this types of wines.

Grapes typically used in making Champagne are Chardonnay  blended with Pinot Noir and Pinot Meunier. But in other regions sparkling wines are made with a wide variety of grapes, being that the main reason of why we can have these wines in many different styles.

And although most of the sparkling wine is usually white or rosé, there are many examples of red sparkling wines such as Australian sparkling Shiraz.

Brut: There is just a hint of sweetness, but due to the high acidity of most of the sparkling wines, it seems dry. This wines are crisp and citric.

Extra Dry: Dry, but not as dry as Brut or Extra-Brut, meaning it retains a slight sweetness.

THE LEGEND OF DOM PÉRIGNON

Do you want to know how sparkling wines was created? There are many legends, but the preferred one is a story that occurred in the 1600s, by a French Benedictine monk named Dom Pierre Pérignon. It is said that the monk first crafted this bubbly brew at the abbey of Saint Pierre d’Hautvillers by accident. In this region, the grapes had to be harvested earlier than usual in winter. When he checked the fermentation tanks, it seemed to him that the yeast had finished converting all the sugar to alcohol, but that was because they were slept, not dead. When the yeast woke up owing to higher temperatures of the season (the wine inside the bottles began to warm in spring), they started to eat all the leftover sugar, creating carbon dioxide that couldn’t escape, starting in fact a second fermentation in the bottle, carbonating the wine. By surprise, he tasted the bubbly wine and exclaimed “Come quickly, brothers! I’m tasting stars”

In the beginnings, they had several problems with the explosion of the bottles all over the cellar, due to the effervescence of the bubbly wine. So they decided to change the shape of the bottle, use a thicker glass, and start to use cork. The problem was solved and the legend of Dom Perignon start.

If you want to know more about sparkling wines, check this video above. Cheers!