Whilst grape stomping is not uncommon to produce red wine or Rosé de Saignée in Champagne, the vast majority of the time pressing of the grapes is strictly regulated and very gentle.

This is because two thirds of the region’s grapes are black, yet from the time of Dom Perignon, the most common wine in Champagne is white sparkling. In order make the clearest wine possible it is important to manually whole-bunch pick the grapes in crates of maximum 50 kilograms – so the berries do not break. The crates are taken to the winery, weighed and put in stacks to be pressed.

The three main grape varieties (Pinot Noir, Meunier and Chardonnay) are generally pressed separately. The traditional Champagne press is a very low and wide 4000 kilogram basket press operated by 4 pressureurs. The men work in pairs to transfer the grapes from the crates into the press – all along making sure the grapes are evenly spread out in the press. Once full, the press will slowly squash the grapes in four or five times. The first time the pressure will go up to 50 bars, and once the juice stops flowing, the press will open again and the pressureurs will gently shovel the grapes at the edge of the press and put them in the middle thus redistributing the grapes in the form of a high gateau. This process is called la retrousse and is generally repeated four times. 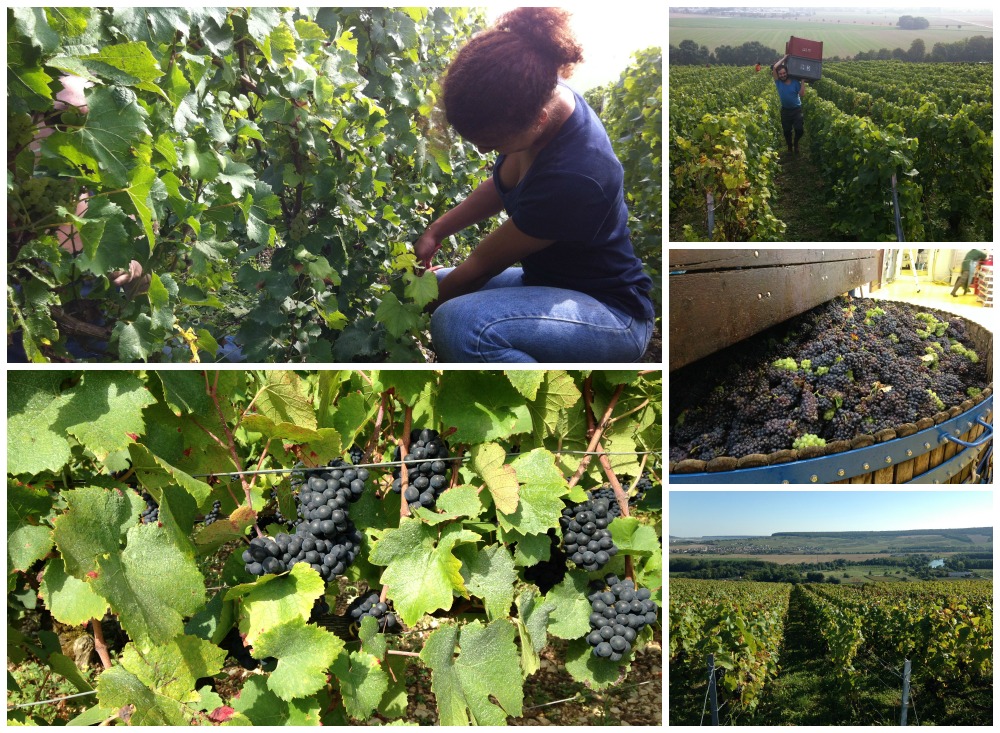 The Champagne regulations stipulate that 2550 litres of juice can be extracted from the 4000 kilograms of grapes – this is significantly less than in other regions where we generally end up with one litre of juice per kilogram of grapes. Of the 2550 litres of juice, the first 2050 litres is called the cuvee, and the last 500 litres la taille. More often than not, the first 50 litres of free flow are also added to la taille as they may contain a lot of dust and as the berries have broken this juice can be darker as well. After the 2550 litres have been extracted, winemakers can press an extra 2% – this juice is called la rebêche and is used to make Ratafia, a sweet aperitif not dissimilar to Pinot de Charentes. The grape skins and stalks need to be delivered to the distillery where they will end up as Marc de Champagne or industrial ethanol which is the main fuel source of the Reims public transport services.

From the above it is clear that harvest in Champagne is pretty hard work. The grapes are very close to the ground, so the picking is pretty back-breaking, and so is working as a pressureur at a traditional press.  That is why many wineries have opted for more automatic presses. Besides the pneumatic press, used just about everywhere in the world, the ‘Coquard à met inclinant’ which is an automated version of the traditional press, is becoming more popular. This is because it presses horizontally and on a 45° angle, which means that when the piston retreats for retrousse, the grapes automatically slide down. This sliding action allows for a very gentle handling of the grapes similar to the traditional press. In a pneumatic press the grapes can fall straight down which often damages the berries. The automatic presses come in different sizes, and are generally still loaded manually except in the largest pressing centers.

Once the juice is pressed, it is allowed the settle for about 12-24 hours before it is racked off in a tank or barrel to undergo alcoholic fermentation.

We have a wide range of tours in Champagne to suit any taste and budget.

Caroline Henry is a wine writer specialising in Champagne. With her extensive knowledge of Champagne and the region, she has written the first book on environmentally-produced Champagne, Terroir Champagne : the luxury of sustainable, organic and biodynamic cuvees, which she is trying to self-publish. If you would like to help, check out Caroline’s cause here.