A Journey Through Port in the Douro

Port, or Port wine as the Portuguese call it, is rather ironically a drink that is so quintessentially British, some people presume it comes from the UK. A couple of years ago, Colin Hampden-White visited the Douro to discover some of the Port region’s finest offerings…

Some will say that when visiting the Douro, Taylor’s is a must; others say that the place not to be missed is Quinta do Noval. There is a third, however: Quinta da Romaneira, owned by Christian Seely of Noval fame, but has only been under his tenure for ten years. Recently, I spent some time in the Douro and visited the three port houses, uniquely different in their history and outlook.

Quinta do Noval is owned by AXA millesimes, an offshoot of the French insurance company, which also owns Pichon-Baron in Bordeaux. The quinta has been sympathetically restored and modernised. Its tasting room overlooks vats of the new wine but the buildings retain a romantic feel: picturesque tiles line the dining room walls, narrow passageways with stained glass between the buildings lead to the vines, it all feels like a bygone era. Only 200 – 300 cases a year are produced of legendary vintage Noval Nacional, created from non-grafted pre-phylloxera vines grown on a tiny 2 hectare plot next to the quinta. Chatting with Christian Seeley, MD of of Axa Millesimes, at a tasting in London of Nacional vintages dating back to 1963 confirmed this amazing estate on the itinerary. The tiny Nacional plot even has its own pigs to provide fertiliser, and when individual vines eventually die, the same variety vines are planted back into the ground to keep the plot free of grafted vines. The rows are tended by a mule and his human companion; mechanisation can not penetrate here.

The Port wines from Noval

Quinta do Noval has a Ruby port which has been rebranded as Noval Black, aimed at introducing port to a younger market. They also produce excellent 10 – 40 year old tawny ports, a 2000 Colheita (nowadays, 2007 Colheita), LBV 2007 (nowadays, 2013) and Vintage ports, from selected sites, every year from 2011 (currently the 2019 has just been declared). The 2011 Vintage was so good that individual house styles are easily distinguishable, that of Quinta do Noval being lush, juicy and red fruit style in its youth.

For dinner the quinta’s table wines were served with the cook’s speciality of goat, before a delicious 1976 Colheita and finally a 1994 Noval Nacional, this last wine has such purity and density of fruit, balance and elegant you’ll never want the bottle to end. The next day I spent in the vineyards with my host Catia, learning about the viticulture of the estate and meeting some of the harvest workers. There was rain forecast and the best of the grapes where hurriedly being harvested before this crop damaging event took place. In the afternoon a visit to the warehouse showed the wines aging in old wood, which is simply meant as a vessel for the wine as it ages. As we wound through the barrels and vats we met José Gouveia who at 84 years old was still mending vats having worked on the estate for well over sixty years. Far from tired, he was engrossed in his work, his face animated as he kept the precious liquid safe in their surroundings. 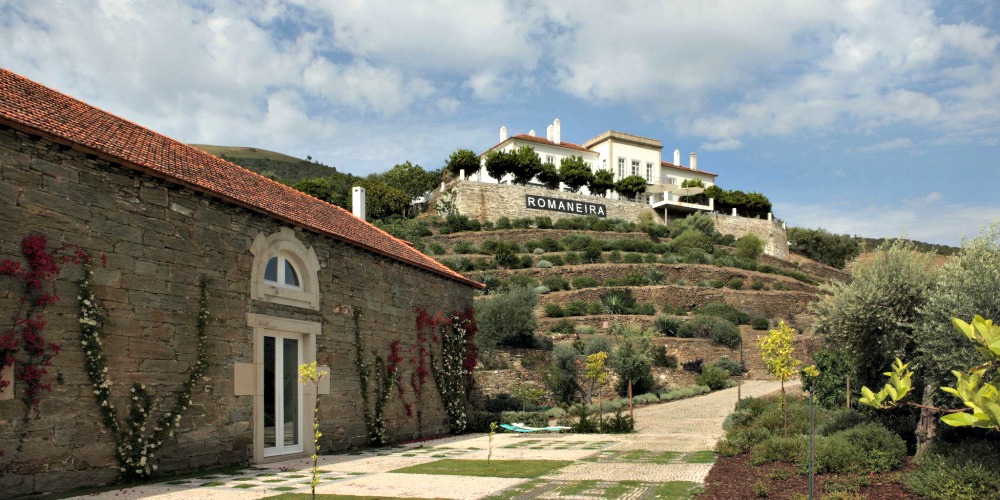 Quinta da Romaneira is not far from Noval; in fact Christian could see the estate as he worked at Noval and had in mind one day to acquire the estate. Ten years ago he managed this.  The estate boasts an exclusive hotel where the likes of Brangelina have stayed. This idyll is also now Christian’s home and the estate thrives under his command. Quinta da Romaneira stretches for about two miles along the river Douro with 400 hectares of land, of which 300 hectares are grade A vineyards. Much of the land is now planted, but there is still ample space for expansion. As well as the production of traditional port, fabulous red wines have also been created over the last ten years, alongside a crisp white and a wonderfully balance, aromatic and delicate rosé.

A stay at the Yeatman Hotel

Back in Porto, I was welcomed through the doors of Villa de Gaia on the opposite bank of the river from Porto, for a sojourn at the Yeatman Hotel. It’s a recently-built hotel that feels as if the city had specially reserved just the right space for it, overlooking the river with a magnificent view of the Unesco protected old town of Porto. The hotel makes a fantastic base for visiting the Douro offering the only Michelin star restaurant in Porto, a luxurious spa, conference facilities and space to land your helicopter. Try the revolving bed in the Bacchus suite so you can switch between TV and the magnificent view.  This hotel is all about wine; each bedroom is sponsored and themed by a winery or port house and corridors educate guests about cork production and the history of wine in the Douro. The cellars (which can be visited) have an extensive list of Portuguese wines alongside other old and new world wines.

A train ride to Quinta Vargellas

An old-fashioned train ride is the best way to experience the spectacular views of the Douro, following the river, winding up the valley, a new view around every corner. Traditional white villages nestle among the vines or are poised on the shore edge as if about to take a dip. Passing through tiny stations with their colourful tiles, Quinta Vargellas has its own station where I was greeted by Alistair and Gillyane Robertson, 4th generation of the Taylor’s family. Quinta Vargellas is a country home for the Robertsons who return at harvest, hosting lucky guests and immersing them in the world of port. A folly, built for Alistair and Gilly’s 40th wedding anniversary, overlooks all the differing types of planting style of vines – traditional walled terraces, mound terraces and linear arrangements. These patterns in the hillside start to give the idea of how much love and care is put into the land to create the ports. Watching the sun go down over the vines with a glass of Chip Dry Taylor’s white port mixed with tonic and a little mint was the perfect journey’s end.

A mini guide to Port wines

Port comes in many differing styles; Ruby is a blend of vintages, LBV (late bottled vintage) is kept in barrel longer than vintage port before bottling to create a port which can be drunk immediately. Tawnies are aged even longer in barrel and released after 10, 20, 30 and 40 years. The single vintage expression of a Tawny is known as a Colheita and can be much older than the aged expressions. Finally there is vintage port; this can be a blend of various Quintas (or farms) giving an overall house expression such as Taylor’s Vintage Port, or can be released as single Quinta vintage ports, such as Quinta Vargellas for Taylor’s, or Quinta do Noval, a single estate owned by AXA Millesime. Supper on the terrace, to the rhythm of the cicadas, was naturally, all about port. From vibrant and refreshing gazpacho, subtly enhanced by a dash of white port, to delicate fruit pudding with 20 year-old Tawny; cheese was accompanied by a rare 1991 Quinta Vargellas vintage port. As though attending a late-night party, we joined harvest workers in the lagard, reminiscent of a small, shallow swimming pool, to tread the grapes. Purple-stained legs danced to tunes from an organ. To round the night off, we sat by the pool with 20 year-old Tawnies from both Taylors and Fonseca to appreciate the differing house styles.

The second half of my trip took a very different turn. From the single quinta estates over, we moved on to visit the huge warehouses of Taylor’s and their various different brands: 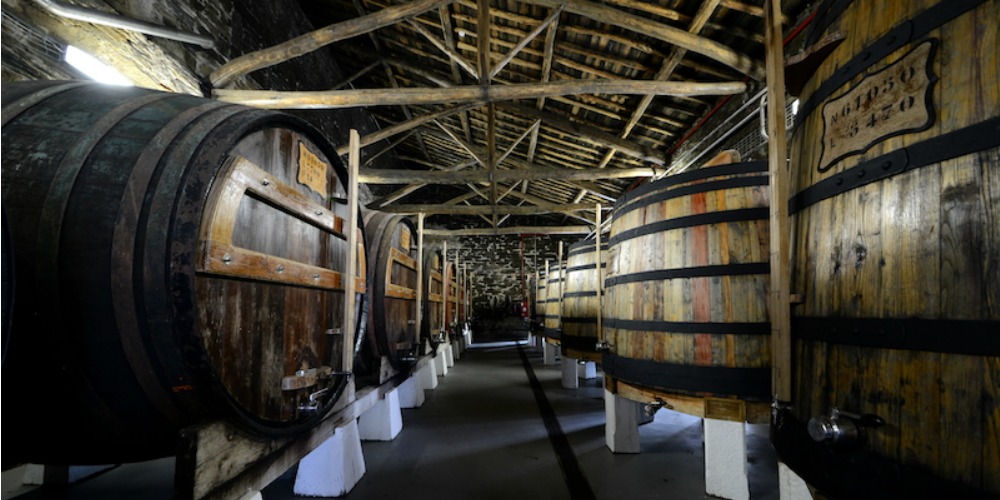 The Nogueira winery is Taylor’s main winery in the Douro and is just 45 minutes’ drive from any of the quintas from which they receive grapes to ensure perfect conditions for vinification.  It’s next to Quinta da Roêda of Croft, another Taylor’s brand, acquired in 2001. Much work has been accomplished in the vineyards since Taylor’s ownership; close inspection of the vines at Quinta da Roêda showed how the differing grape varieties need discrete positioning and spacing. This creates a lattice of green across the hills which is like no other wine region. Croft has improved a great deal. David Guimaraens, the great-great-great grandson of the founder of Fonseca, Manuel Pedro, has been the head winemaker since 1994.  An inveterate story-teller; he oversees the winemaking and blending for all four Taylor Fladgate Port houses.  He’s most proud of making the Croft 2003 as the conditions were difficult to control and the year very hot, yet he managed to produce a wonderful wine.

A most memorable of tasting at Taylor’s office included not only the complete range of ports from three of the houses owned by Taylors, but also some very old colheitas from the newly acquired Kohn port house. Incredibly rich and complex, these dated back to 1863 and showed how good port of that age can be. The tasting concluded with the magnificent and other-worldly Taylor’s Scion Tawny from 1855. It has everything from zesty orange peel to deep dark bitter chocolate and a massive range of dried fruits including prunes, figs and dates.  This is not just an interesting old wine, but a hedonist’s dream, creamy in texture, balanced beautifully with the acidity, leaving the palate clean and eager for more. Porto is littered with port lodges; each port house has a lodge where the wine is stored in huge vats before shipping and Taylor’s is one of the most impressive with vats varying in size from a few hundred litres to 100,000 litres. Here we had lunch with the present CEO Adrian Bridge whose wife, Natasha, is the 5th generation of the family. During the evening, the weather closed in and by the morning the rain was coming down hard. Even in these adverse conditions the hills of the Douro have a mystical feel as hillsides disappear behind clouds, reappearing looking like great whales breaking the surface. The sound of the rain drumming on the vine leaves has the same enchantment as sitting under a tropical forest canopy in a storm. I could have stayed there quite happily, letting time do its stuff, waiting for the next great vintage to emerge. I recommend you do the same.

Want to experince this side of Portugal for yourself? How about a wine, boat ride and palace tour?