Greece and the History of Wine

The Origins of Wine

You can trace the origins of wine all the way back through history… rumour has it that the god Dionysus – the son of Zeus and Semele –  was the first to discover the fermented juice of the wild vine. The taste of the juice was so great that he quickly shared this newly discovered delight with the nymphs and mountain shepherds. When the shepherd tasted the wines for themselves, they soon forgot their sorrows and their souls filled with euphoria. But Dionysus did not rest on it; he decided to transform into a woman and went to find farmers and villagers and transferred to them his agricultural knowledge and wine production.

Today, Dionysus’ gift to the world has become a powerful ally to people in times both of joy and of sadness. In some circumstances, wine even has the ability to make a person more optimistic! 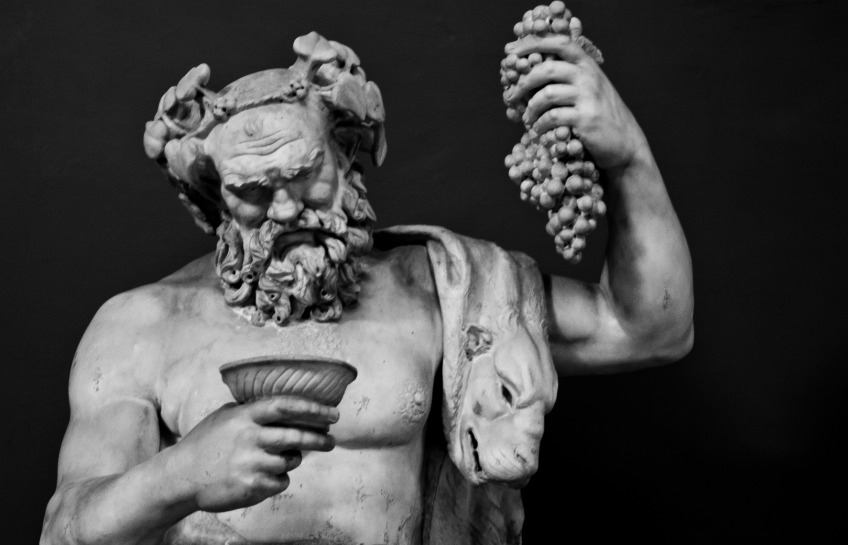 In other cultures and civilisations wine production is mentioned in very early Mesopotamian civilisations (like the Babylonian Code of Hammurabi of the 18thcentury B.C.), or even in the Bible in the book of Genesis when Noah’s ark ‘rests’ in Mount Ararat. In Egypt, wall paintings in Pharaoh Pyramids of the 4th millennium B.C. depict vines of 6 different varieties, and Egyptians harvesting and producing wines.

There are some opinions on how the vine arrived in Greece: some claim that the route was via Egypt, Crete, Naxos and the mainland, others argue that it came from Mesopotamia via Thrace. Probably both opinions are true, however what really matters is the ‘welcoming’ that Greeks gave to this plant and the extremely fast and extensive farming that followed its arrival from the indigenous Greek ‘phyles’, and finally the extraordinary and really unequaled, unique wine types that were evolved in the Greek peninsula.

Greeks being a native maritime people seized the opportunity to trade their unmatched and unrivaled wine produces and made fortunes from it since antiquity to the medieval time in the era of the Byzantine Empire and the Venetian Republic. Just one example is that of the Phocaeans who established in the 6th century B.C. a colony in southern Gaul, modern day South France, and named it Marseille. Those pioneering Greeks, brought together vines from their homeland and planted them in southern France. Those vines subsequently spread all the way to Spain.

According to some experts Crete is the earliest recorded territory in the European Mediterranean area producing wine, with traces and findings dating back to 2000 B.C. The enormous pots discovered in the Minoan Palace of Knossos (Heraklion, Crete) and the Vathypetro treadle are two undeniable evidences that Minoans knew about and had mastered the culture of vines and the production of wines. Furthermore, because of the sea power of that historical period, it was quite easy for them to transport and trade their wine and to become rich from this trade. Some other wine producing Greek islands of antiquity were Lesvos, Naxos, Andros, and Tinos.

Romans regarded Hellenic wines  to be of the best quality – even better than their own ones. It was Horace, one of the most renowned Roman poets, who in a moment of brilliant poetic inspiration named Greek wines ‘divine beverages’ that can give joy to poets.

In Greece the most commonly consumed wine type is the white. According to statistical findings, white wine consumption reaches 70%, and is particularly popular during summertime when seafood and fruits dominate the seasonable Greek cuisine. In my opinion, the best wine and food pairing comes about when a glass of white wine is paired with a delicious fish plate full with aromas of oil and oregano. The value of white wine can truly be appreciated with seafood and local spices like oregano, thyme and rosemary along with plenty of lemon.

With its abundance of things to see and do, its Mediterranean climate and beautiful scenery, Greece makes the perfect holiday destination. To find out more about Greece and view our wine and food tours, click here.