Santorini is Winerist’s top region of the month of May. This is certainly one of the best times of the year to visit this flavourful place, enjoy the sea and tour the island with its iconic blue dome churches. Santorini’s vineyards are special for so many reasons. Firstly, they are ancient vines that have been protected by phylloxera, resulting in low yielding powerful wines. Secondly and more interestingly, the vineyards you will see in Santorini are unlike anywhere else – the vines look like a round basket and not the usual row of vines. This is to protect the grapes from the strong winds on the island and from the heat.

Todd of the Wine Compass Blog will take us on a journey through Santorini as he unravels the history and the future of wine production of this paradise island.

by: Todd Godbout, author of the Wine Compass Blog

The Greek civilization hosts one of mankind’s longest wine-making traditions, certainly not the earliest, but definitely one of the first. And this tradition didn’t originate on the mainland, but on the island known for its picturous villages and white sandy beaches: Santorini. Historians believe that wine-making commenced on these islands around 3500 BC and flourished until the devastating volcanic eruption in 1600 BC. This catastrophic event destroyed all human settlements and created the current geographic layout of the archipelago. It is believed that a few ancient vines survived the lava flows and form the lineage to the island’s most important indigenous wine grape: Assyrtiko. In fact, this variety is the oldest known Greek grape variety. Along with Athiri and Aidani, these grapes comprise the majority of Santorini white wines as well as Vinsanto (Italian: “holy wine”). This is a dessert wine made from sun-dried grapes, then aged in barrel; a Mediterranean delicacy for centuries.

In modern times, wine production in Santorini has suffered as the tourism industry overwhelmed the island. To satisfy demand, wine producers created cheap bulk wine and vineyards were replaced with retail or lodging establishments. This in turn, led tourists to abandon the local, ironically because of this over-crowding. Santorini needed a breather, and when it came, the island’s wine industry refocused on making quality wine. 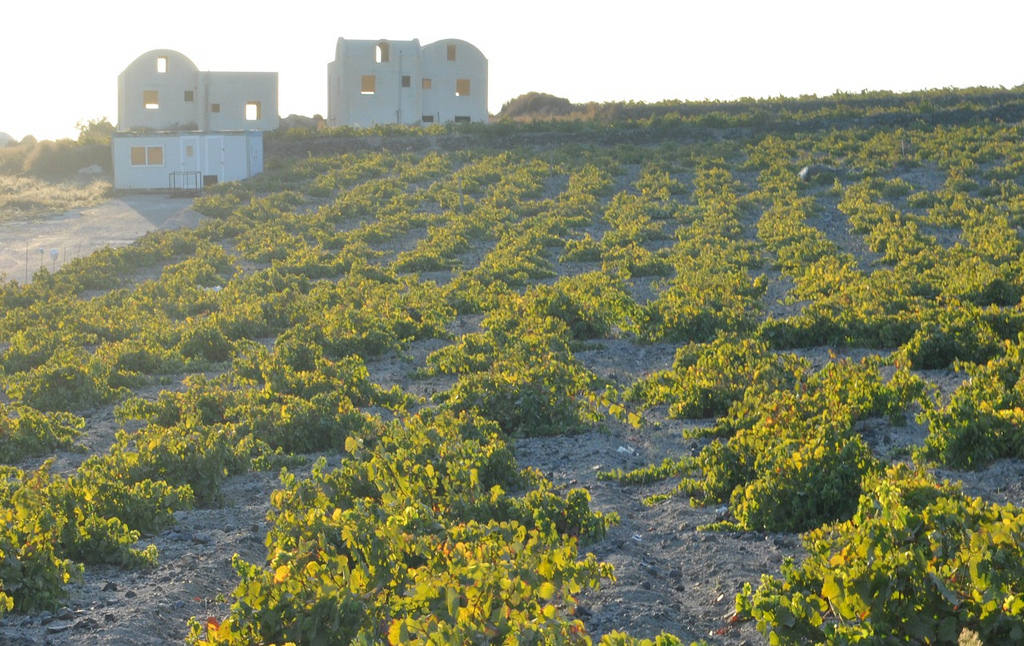 And the archipelago is very suitable for producing quality wine. Because of the volcanic eruption, the limestone base is covered with chalk, slate, ash, and lava. This composition helps to create wines with a naturally low pH level and high acidity. The lack of clay in the soil also creates a natural barrier to the Phylloxera louse which has never ventured onto the island. As a result, the vines are some of the oldest, ungrafted vines in the world. Finally, rainfall is quite rare, but the vines are “watered” at night by a mist that rolls in from the Aegean. The seas also bring heavy winds so the vines are pruned like a cylinder in order to protect the fruit. The result of this hot, dry, climate is very low yields – averaging 25 hl/ha.

Today there are ten wineries operating on Santorini and a fledgling wine tourism industry is emerging which is encouraging the movement to quality. All the wines are protected under the “Santorini” OPAP designations of origin. I’ve created a map pinpointing Santorini’s wineries that are listed here:

Over the past month, I have also been able to taste a few wines from some of these wineries courtesy of the Wines From Santorini. Assyrtiko, Athiri and Aidani are still the favored grape varieties and possess the minerality and acidity associated with more northern climates.

The first wine we sampled was the Gavalas Winery 2009 Santorini a 90-10 blend of  Assyrtiko and Aidani. The Gavalas family has been producing wine for three centuries in Megalohori, on the upper northwest coast of the island. The grapes from this wine were harvested from the “vineyard of Santorini” that is considered to be the oldest in Greece; perhaps even the world’s oldest continually cultivated vineyard.  Pretty amazing. Only 25% of the juice is extracted from the grapes which is then fermented in stainless steel. The wine starts with a citrus aroma mixed in with a slight dose of salty air. The wine tastes fresh and clean, with hints of minerality and decent acidity. Very natural and nicely done. 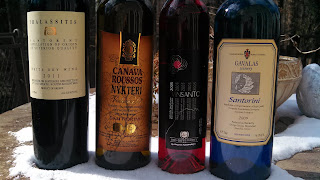 The next wine was the Gaia Estate 2011 Thalassitis, 100% Assytiko. This winery is a youngster in relative terms, having opened in 1994 in Monolithos on the east coast of the island. The owners, Leon Karatsalos and Yiannis Paraskevopoulos, started the winery in part to save an old tomato processing plant from being lost to the modern world – i.e tourism. Their Thalassitis (“Thalassitis Oenos” Greek for sea-originated wine) is named for the ancient practice of mixing wine with sea water apparently for therapeutic reasons. Did they know something we are missing today?  Instead the owners of Gaia Estate believe that their proximity to the Aegean Sea creates a similar affect and provides the Thalassitis with a unique flavor. That, and 80-year old vines. The wine is bigger than the Gavalas with even more acidity but with the same mineral and and sea salt characteristics. This is your “Wow” wine, very impressive.

The Hatzidakis O.P.A.P. Santorini is another 100% Assyrtiko, harvested from their certified organic vineyards situated around the village of Pyrgos Kallistis. This wine starts with a citrus nose which transforms to a salty minerality on the palette. Loads of acidity make this a refreshing choice, but the mineral flavor takes a while to get accustomed to. Very interesting.

The final white was the Santo Wines Nykteri PDO Santorini. Nykteri refers to the appellation, which requires wines to consist of at least 75% Assyrtiko. The winery is located in the village of Pyrgo and encourages visitors to enjoy their wines as well as the views of the Santorini Caldera. This wine contains some Aidani and Athiri and exudes complexity, more citrus plus some spice on the nice; with a creamy mid-palette, leather minerality, and that now expected, refreshing acidic finish. Very nice.

Finally, we moved to a vinsanto, the Karamolegos Winery 2005 Vinsanto to be precise – a blend of Assytiko and Aidani. These grapes were sun-dried for twelve days, fermented two months in barrel, followed by two years aging in more oak. The result is a blood orange wine with raisins, honey, nuts, and vanilla popping up at various stages in the palette. The wine is syrupy – but not sickening so – with a long finish that invites you back for more. This is something else. We were first introduced to this style from a Cretan Wine exhibit at the South Beach Wine & Festival years ago and promptly forgot. Not anymore.