Wild, natural and warm-hearted is the overarching impression I took from my visit to Georgia. It is a land of friendly and inviting people with nature and animals wandering, well, everywhere. Trotting along roadsides you’ll see numerous dogs (with ears cropped to protect them from being torn off by fighting wolves). While down a modern freeway, you might have to slide a lane over for the cows chomping grass in the median strip, or stop abruptly for the occasional pig with her piglets darting across the street. This countryside freedom is reflected in the cities – whilst very modern and even “hip”, there is rarely a stop sign. As a pedestrian, just crossing the street might be hazardous to your health. However, Georgians are reluctant to give up these precious freedoms having been tested and often tortured by numerous invaders over the centuries including the Greeks, Spanish, Mongols, Turks, Persians, the list goes on. The last to leave was the Soviet Union in 1992, although part of Georgia is still disputed territory with Russia. However, while the Soviets may have left, their authoritarian stamp on the country remains; though they never managed to subdue the hearts of the people. As a result, the Georgians are rebuilding their country and their culture with astounding enthusiasm, one metaphorical brick at a time; and wine, as it always has been, is central to this movement. 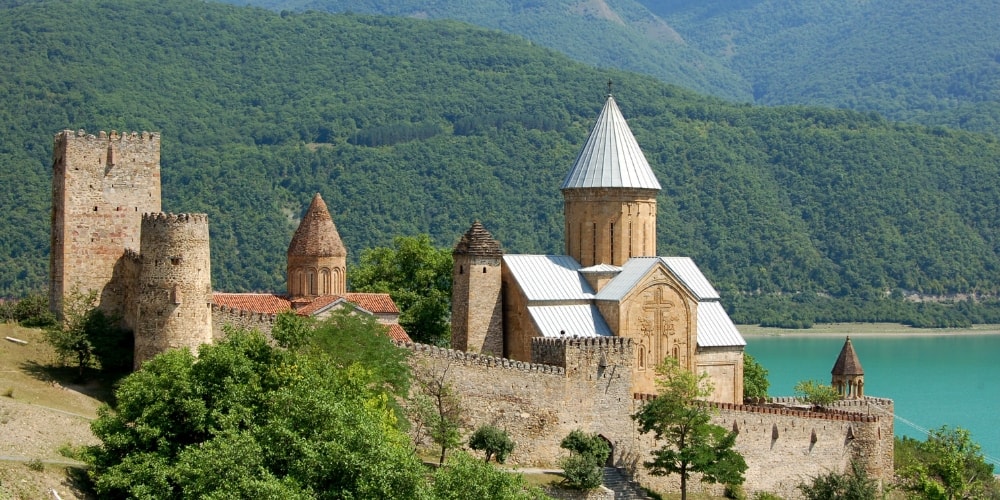 So, eating like a local in Georgia isn’t merely about eating. Georgians take great pride in their hospitality with a sincere desire to make new friends. This is evident from the moment you meet, to sitting down to the table where there is likely to be an abundance of food already there to greet you – fresh from the oven, stuffed cheese bread called Khachapuri; or perhaps a salad of tomatoes, cucumber and sweet onion (sound familiar?); pickled peppers & caper flowers and olives are frequent accompaniments. Mythology tells that the Greek Argonauts came to Colchis (a foreign name for the Georgian kingdom Egrisi, in what is now western Georgia) in 1300 B.C. via the Black Sea, in search of the Golden Fleece. As the story goes, this is where Jason met the wealthy princess Medea who enjoyed the study of herbs and remedies (sadly these interests often ended badly for women in those days). The story starts well enough, until Medea goes off the rails (no doubt due to Jason’s philandering) but one thing that is certain is the Greek influence on Georgian cuisine. Many of their dishes are nuanced by outside influences but, they are always rooted in a Georgian style of cooking.

Like all countries, food is a necessary and important expression of culture, but it’s wine that is really at the heart of Georgia. Considered “The Cradle of Wine”, Georgians are known as the true inventors of wine with evidence of winemaking going back more than 8000 years. While many people may view modern Georgia as a pioneer wine market today, it is still common for Georgians to grow grapes in their gardens and make their own wine from family knowledge handed down from generation to generation. Traditional Georgian wines have strong tannic qualities that come from 5-6 months maturation on the skins and an earthiness imparted by Qvevri (clay amphorae, buried in the ground). This tannic structure of both whites and reds goes well with food, and Georgian food is meant to be shared. As a country which has faced numerous invaders and played host to a multitude of trading nations as the halfway point along the Silk Route, food and hospitality have always been a means for creating friendships, making alliances and supporting one another. In hard times, neighbours took turns to gather together to make meals. This neighbourly tradition served the physical, mental and emotional needs, while helping to maintain their own language and culture. And because they made their own, there was always wine! 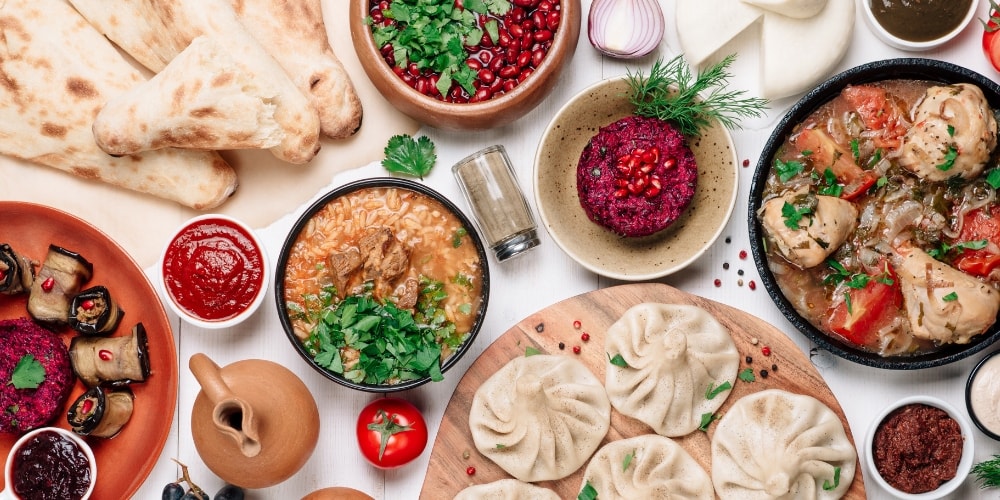 These are some of the reasons that the role of Tamada (toastmaster) is such an honored position at a Georgian feast. He (or she) is often the host or a friend who is chosen for being particularly genial, funny or poetic. The Tamada keeps the meal rolling and imbues it with depth and meaning. Amber whites like Rkatsiteli, Tsinandali (a blend of Rkatsiteli and Mtzsvane) or Kisi wine will most certainly be raised as the first of many heartfelt toasts that are given to Peace, Friendship and Family. As a relatively small Christian nation which borders several Muslim nations and Russia to the north, Georgia has had perhaps more than its share of political, and at times, violent struggles. This is why, in the quiet of the home, the Tamada has always been of great importance for solidifying relationships, remembrance and celebration.

‘Supra’ is the name given to large feasts, and refers to the symbolic blue and white tablecloths. Densely decorated, these have been used for over three centuries and are an integral part of the event. Originally, they were adorned with Eastern ornamentation, which came from India and Iran. Now the patterns have symbolic meanings more closely associated with Christianity (fish) and the tree of life (deer). As one course wanes, the next begins. Another toast is made as the amber wines continue to flow like the many rivers that criss-cross Georgia, providing the fresh fish that hosts simply barbeque over open flame with lemon slices. Chicken livers with onion and pomegranates with Lobiani (bean stuffed bread) are a staple, as are smoky Sulguni cheese stuffed mushrooms to complete the course. 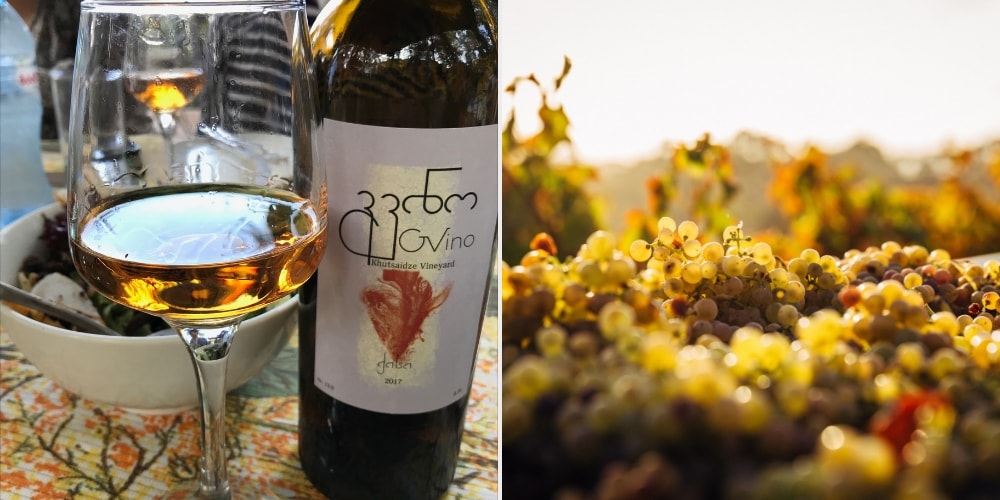 When the wine turns to a deep red Saperavi variety (which literally means ‘ink’), another toast is given to Country, Language, Religion and Wine, of course! These elements that express the bedrock of Georgian culture are delivered to rousing cheers of “Gaumajos!”, which unsurprisingly means “Victory!”.  Mtsvadi or Shashlik skewers of grilled pork (or other meats) are served with pomegranates and onion, and are reminiscent of the Ottoman Turk influence. Badridzhani Nigvsit, a wonderful sliced and grilled aubergine (eggplant) with walnut paste is a delicious revelation. Rice with diced dried fruits and a stew, Chashushuli, is a lusciously-spiced and deeply flavourful beef dish, served with fresh Shoti bread for soaking up all that gorgeous gravy. The Persian influence with the spices in the rich stews and bejeweled rice dishes are evident, though always anchored in Georgia.

Some of the many invaders were the Mongols (who ruled this land during the 13th Century), and whether it was they or Marco Polo en-route from China to Italy who brought pasta to Georgia, no one is entirely sure. However, the soup dumplings that come primarily from the mountain regions, are filled with meat and juices that ooze delicious rich flavours into your mouth. They look something like dim-sum and are called Khinkali. The larger Khinkali Qvelit are stuffed with cheese and mint, and are sheer comfort food heaven. So much so, that there are restaurants in Tbilisi whose menus offer solely, this divine invention. 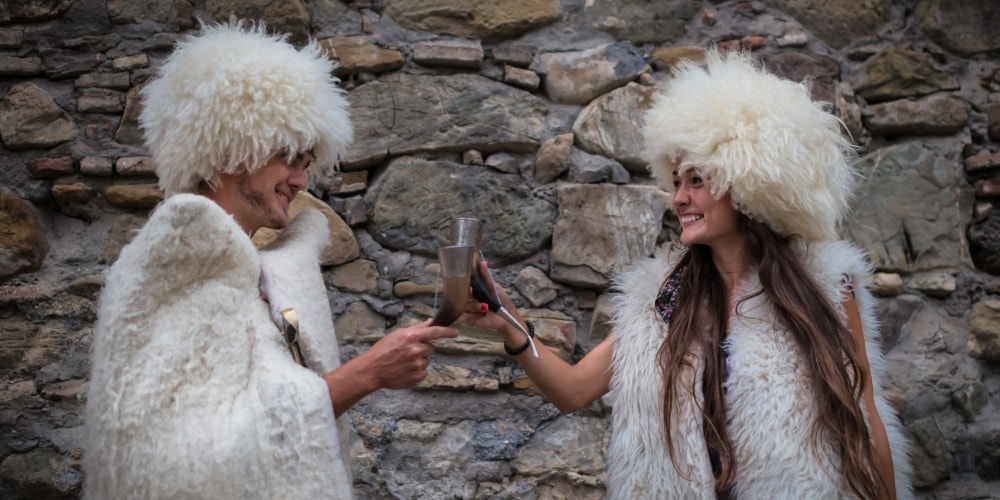 To finish off the meal and keep the good times rolling, your Tamada is likely to break out a local brandy called “Cha-Cha”. This wonderfully lethal drink is distilled from the remaining grape skins after bottling the wine. Similar to Italian Grappa, it is possibly a bit gentler and easy to drink, perhaps this is due to the lengthy maturation of skins in the Qvevri. As many people make their own wine, each family will also have a small, home still for making “Cha-Cha”. It’s as much a part of Georgian culture as the wine, and an agreeable finish to the meal.

Though the influences on cuisine may historically come from many countries, many traders and many invaders, Georgia has always put its own spin on its cooking. There is also something incredibly moving and heart-warming about Georgia and her people – predominantly their fierce determination to hold onto their culture, and the love of sharing it with others through their wine, cuisine and generous hospitality. They’ve faced hard times and are now re-imagining good times and always, always somewhere at a table together. As your Tamada is sure to say, here is to family, friends, language, country, religion and WINE. Gaumajos! 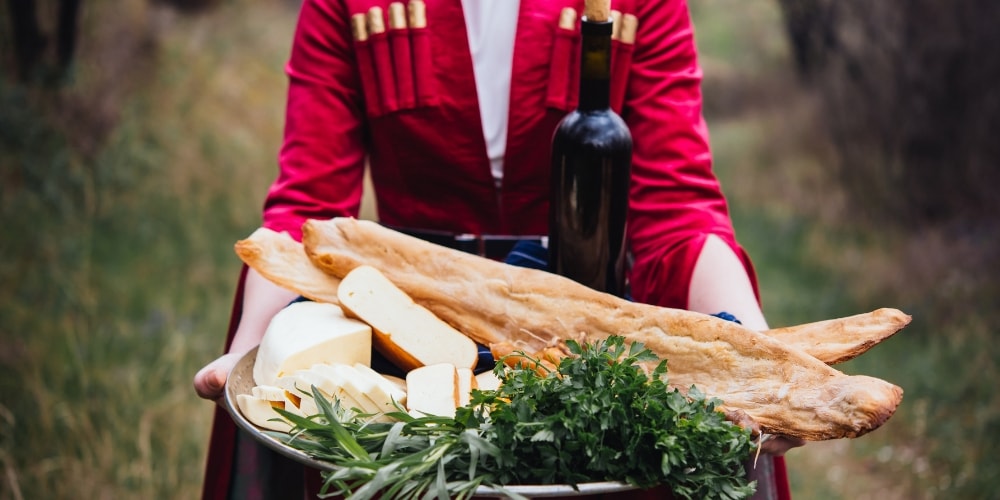 Some wineries may provide ‘Supra’ style lunches on request or as part of their tasting experience (ask before visiting), but here are a few of my favourite places to get great Georgian cuisine in Tbilisi:

Traditional Georgian vibe, natural wines with a modern spin on native cuisine. If lucky, you can expect some Georgian singing.

Set in a rather hip and glamourous garden, on a nice day, for a long lunch, this place is sublime.