Balsamic Vinegar of Modena: Ambiguity and Legacy of its making

In 1598, Cesare D’Este, forced by the Emperor to abandon his beloved capital Ferrara, transferred his residence to Modena, rendering it the Este Ducal capital until 1859. In order to have a regular bureaucracy with the ability to impose taxes, the Este soon registered all the existing artisan and merchant guilds. It is the first official documentation of the Giusti family’s commercial activity, already well established in production and retail of typical Modenese products: lambrusco, “fine sausages” and above all Balsamic Vinegar, already considered the specialty of the family business.

Largest producer in Modena shares legacy and truth behind the barrels

While it is true Giuseppe Giusti has been paying taxes for 400 years, he isn’t claiming immortality. He’s actually the seventh-generation producer in his family’s business of the same name. Giusti lives and works in Modena, Italy, where he produces some of the world’s finest balsamic vinegars made from the region’s lambrusca and trebbiano grapes. His life, as his ancestors, revolves around the barrel room. And when he isn’t working on his aging grapes, he’s out driving in his Alfa Romeo. But, hey, barrels are his life, and such as life, have their ups and downs.

“Sometimes the barrels fall apart,” says Giusti, “and you have to build a barrel around it so as not to disturb the product.”

In addition to the delicate process of working with no less than century-old barrels, he has to adhere to past generation standards in following his family’s precise recipe of 1605. Giuseppe Giusti is the oldest producer of balsamic vinegar in Modena, and as Giusti shifts a tour group’s attention to the Giusti museum of memorabilia in a room outside one of the cellars, he proves this fact. It is here where he explains balsamic vinegar’s humble beginnings, showing documentation from 150 years ago on how to produce balsamic vinegar in a method still known, utilized and widely quoted today as “The Giusti Recipe.” 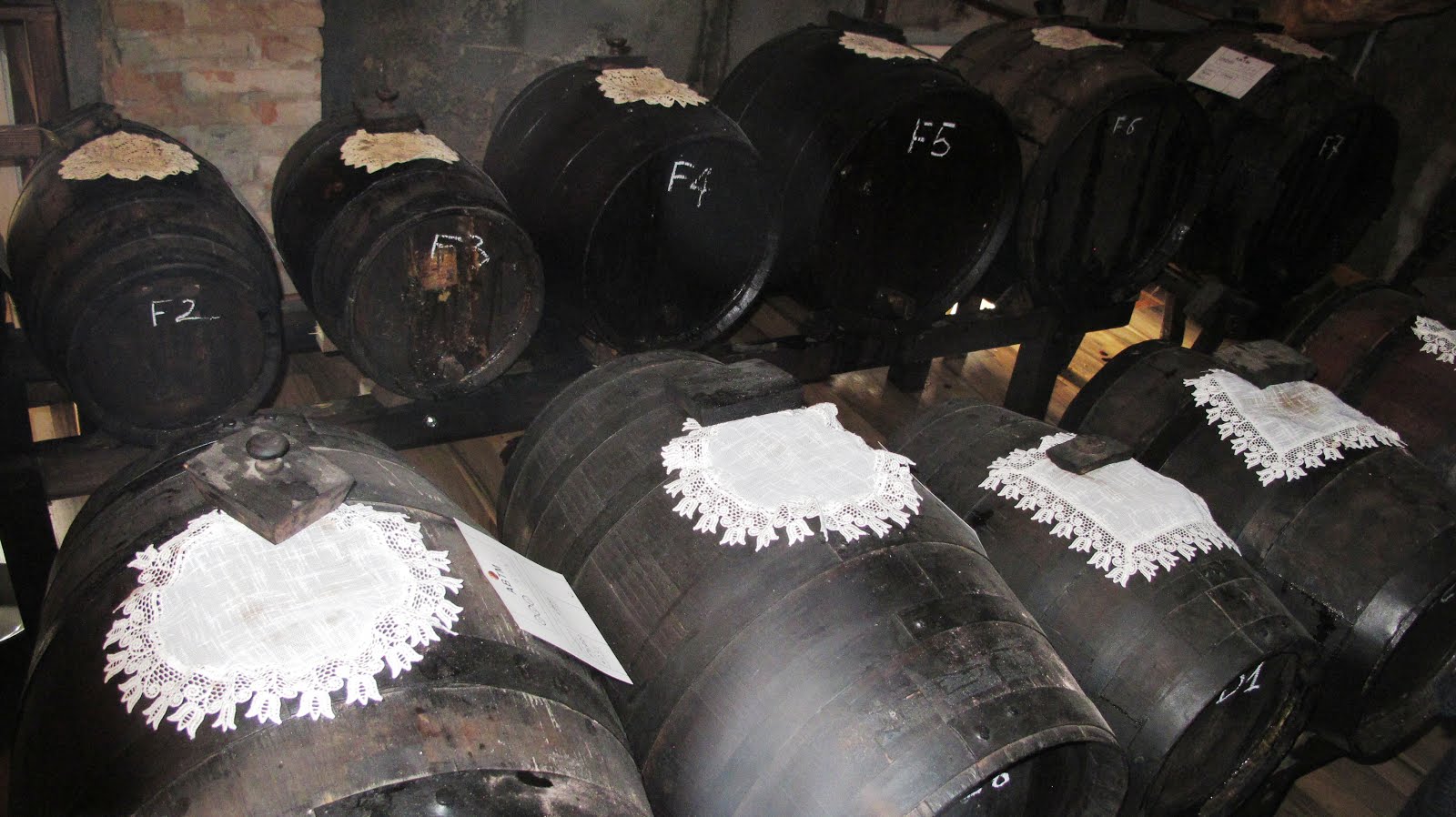 Photo caption: Doilies cover the bungholes of the barrels to add air, but keep out dust and tiny flies.

“Balsamic vinegar is an old product — a typical, traditional product that is not a natural process,” he says. “It’s the result of the fruit of the root of the region, a result of the people.”

Custom dictates the process of acidification and aging of grapes down to a concentrated liquid known as saba (or “mosto”), but it’s not just about cooking the grapes down to a concentrated liquid. In all related matters, Giusti follows family tradition. He continues to set up a row of barrels each time a Giusti is born. And when that child marries, that row of barrels filled with what many refer to as “liquid gold” is presented as the dowry.

The actual barrels influence what’s inside, and Giusti explains the varying types he utilizes: “Use juniper wood or a non-smelling wood such as mulberry in the beginning, and use oak at the end. He points to a barrel in the museum and continues: “and in the middle we use cherry, juniper or sometimes chestnut. It is important that balsamic vinegar tastes all the different woods.”

When he talks of the grapes in the region, he admits that Modena’s wine made from local lambrusca grapes “are known to be not so great, and trebbiano grapes are ‘not bad’.” It would seem the first generation Giusti’s were smart in avoiding competition with its Tuscan counterpart, and inventive in introducing a new condiment to the world.

Although trebbiano grapes are white, the juice, once cooked with skins onto a 60 percent reduction (traditionally in October), the liquid becomes black. The process in making balsamic vinegar over 400 years ago came about as a result of no refrigeration. The concentrated liquid of the grapes, or the leftover mosto, oxidized in a process referred to as acidobacter, or the removal of oxygen out of the alcohol, results in a sweet/sour and syrupy balsamic vinegar that when aged, tastes even better. Over time, the Giusti’s learned that the more balsamic vinegar aged, the more special it became. 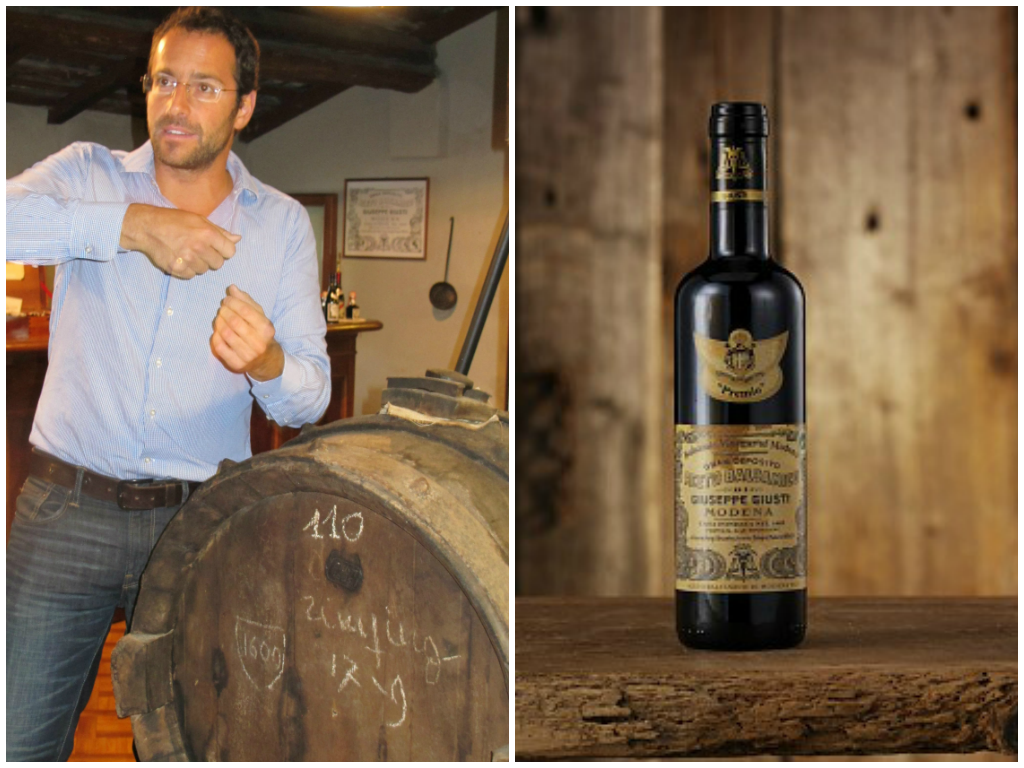 Photo caption: Giuseppe Giusti explains the history of his family’s balsamic vinegar production inside the barrel room’s museum of memorabilia in Modena, Italy.

The legend of balsamic vinegar

The roots of the actual term “balsamic” dates back to the 17th century. Its origin, “balsam” is defined as “good for the earth and to feel better, based on the root ‘balsam’.” According to Giusti, legend has it that the product in the barrel was sent by a duke to the pope, who preferred this gift of a barrel filled with aged balsamic vinegar more than a gift of 100 horses gifted to him by another duke. 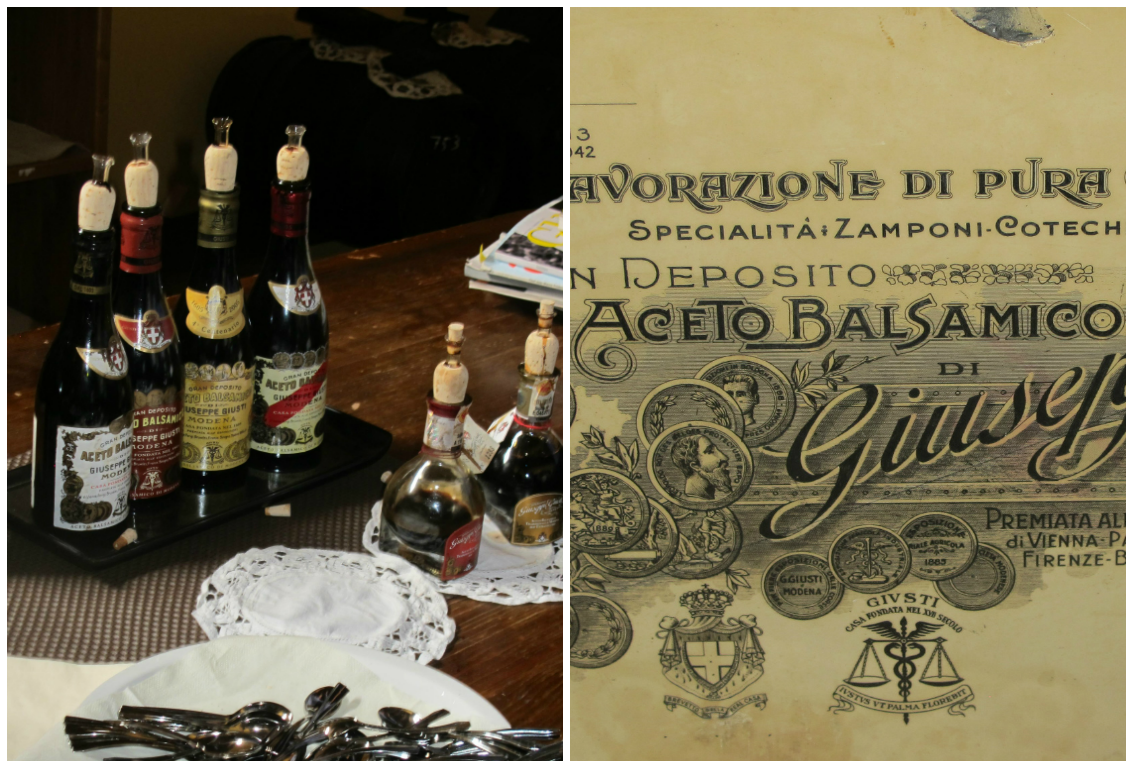 Photo caption 1: A Giusti stone-to-print label made with heavy paper in 1448 for the exhibition of Paris barely revealed the name of the company. After the exhibition, the bottle’s label was updated. ‘Labels were messy, rich and opulent,’ says Giuseppe Giusti.

Photo caption 2: A walk into the barrel room welcomes you with an aroma of balsamic vinegar that permeates the air. Barrels that date back to 1700 and 1800 are organized in a grouping of 5-7 barrels that are rotated according to a traditional method.

In 1863, an earlier Giuseppe Giusti presented a paper during a tradeshow in Modena. He described what balsamic vinegar is and how to make it: which grapes to use, what wood to use and how long to age it. Back then, it was said barrels at least 20 years old must be used, and the minimum time needed to make the product is two years. By 1900, some producers began to add caramel color, which is burned sugar to look black. This tasted bitter, he says, and is what is used to make cheap balsamic vinegar. Giusti frowns upon this use.

Today, balsamic vinegar is made in 60 days. Of course, the longer the product sits in the barrels, the better it ages.

“After 15 years, it begins to get good, and after 30 years much better,” explains Giusti of the 1863 instructions. “After 50 years, it deserves the balsamic name.” As he inserts a glass ciphon, or wine cheater, into an ancient barrel, he admits that it’s impossible to determine exactly how old balsamic vinegar is today. “Because it’s a total blend, and a variety of grapes.” The grapes used to make Giusti balsamic vinegar are the local sangiovese, lambrusca and trebbiano, of which he says he uses the latter two.

For a bottle of good balsamic vinegar, you can expect to pay $10 and upward to $250 for a bottle of higher quality, but, much like wine, there really is no way of knowing if the price is comparable to this condiment’s taste. Says Giusti, “It may be good, but you never know.”

This article was written By Charlene Peters. You can read more articles by Charlene on Sip Tripper.