Out of the Ashes… The Dead Rabbit, New York City

The Dead Rabbit is a bar which occupies a uniquely special place in my heart. This is one of the places that first inspired me to write, a spot where I’ve broadened my beverage-related horizons, made life-changing decisions and somewhere that’s always felt like home to a lone (and sometimes lonely) English girl in a big American city.

That’s the difference between a good bar and a truly great one. It’s not just about the drinks list, it’s about the hospitality, the welcome, the way a place makes you feel. Sentimental? Perhaps. True? Absolutely.

So, when the news broke on July 2nd this year that the Rabbit was closed indefinitely due to damage from a fire which had broken out in the early hours of a quiet Sunday morning, it got me right in the feelings. But, never fear… in their trademark defiant style, the team fought back, and all three floors of the bar have just reopened, barely three weeks later. ‘We were born in a hurricane, and forged in a fire’ was the spine-tingling message that appeared on the bar’s social media – a reference to when the Dead Rabbit first opened in 2012, in the midst of the devastation caused in New York by Hurricane Sandy. 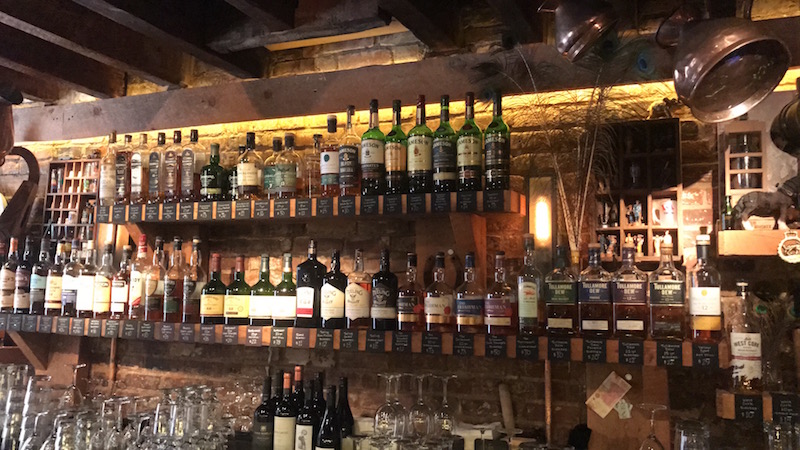 So, once more, the world’s ultimate Irish bar is open for business. And what a business it is. The brainchild of Belfast-born duo Sean Muldoon and Jack McGarry, the Dead Rabbit is styled on the legacy of the notorious Irish street gang of the same name who dominated Lower Manhattan in the 1850s. In just six short years, this place has become the ultimate destination for discerning drinkers and has a CV to match. Their list of awards is eyewatering, featuring pretty much every single industry accolade going including World’s Best Bar 2016, Best Bar in America a staggering four years running, the World’s Best Cocktail List… you get the picture.

The all-important signature mixed drinks menu changes regularly, presented in a comic book format that follows the adventures of the Rabbit (of course). It’s just as creative and interesting as you’d expect, thanks to world-renowned bar manager Jillian Vose, but in true Dead Rabbit down-to-earth style, lacks the pretension of a bar of this calibre. Now on their fifth edition in the series, the latest menu (entitled ‘Domination’ … the team don’t lack confidence) promises such treats as the Control Freak, a blend of Pisco, white tequila, passionfruit, mango, peony tea and IPA beer.

And it doesn’t stop there. February 2018 saw the launch of the Dead Rabbit Irish Whiskey, a super-premium blended whiskey dreamed up in partnership with world-famous Master Distiller Darryl McNally. Aged for five years in Kentucky bourbon casks and finished in bespoke American oak, the flavour profile is completely unique, with all the attitude and expressiveness you’d expect from a product of the Dead Rabbit team. It’s unmistakeably Irish but offers a sumptuously long finish with smooth notes of caramel and vanilla, thanks to those American oak barrels. (Available to buy at www.31dover.com)

The Dead Rabbit team are, quite simply, on a mission to conquer the world, and seem to be doing a rather good job of it. They’ve beaten flame, fire and natural disaster, and continue to come out on top in the most audacious Irish style; this is a bar with an ethos that tourists and regulars alike fall in love with… redefining New York hospitality in the most Irish of ways. Also, the extraordinary drinks help. See you there.

Enjoyed this? Why not check out our top cocktail bars in London or the best places to drink Champagne in the capital?