Brilliantly Bonkers Spirits You Need to Try from Empirical Spirits

So gin’s hot right now, yeah?  Pretty hot, for sure…and mezcal? That’s everywhere these days… and we keep reading about how this year is going to be the year baijiu breaks through in the West… and what about all the bars making their own distillates?  What a world we live in where you can get distilled feta vodka at that trendy new place in Bethnal Green.

But what if you want to go one further?  What if you want a bottle of something really wild?  Like a spirit made from dried, fermented, and smoked skipjack tuna?  Well you call Lars Williams of Empirical Spirits, of course.

Williams, a chef with a seriously impressive CV (including both Fat Duck and Noma) was the head of the Nordic Food Lab before one day deciding to turn his hand to distilling.  He approached the process with the air of a disgruntled chef, explaining that while dinner is a “theatrical, brief moment where people can explore what we’re doing, spirits offer a more transferable opportunity.  They allow us to share concepts, ideas, times and places, such as: ‘this is my idea of walking in woods. This is my idea of the seaside’”.

He also came with questions. Why do producers use the cheapest and fastest processes? Why aren’t spirits seasonal, or subject to vintages? Why would you base any spirit on a disgusting, largely undrinkable sour beer? 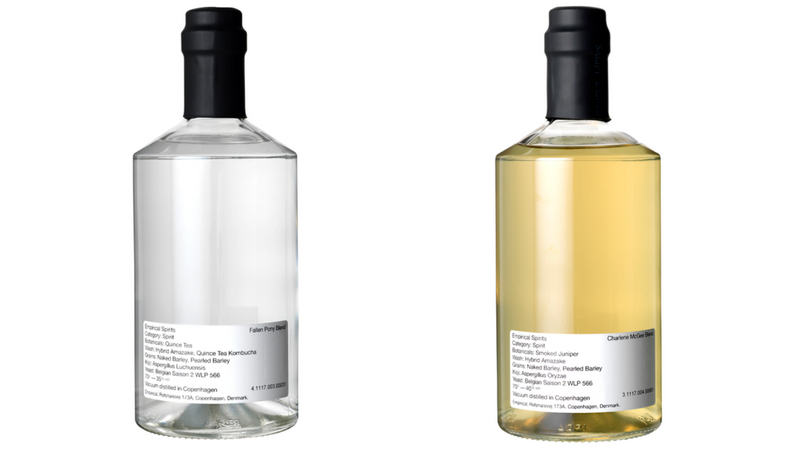 To challenge all of these, Empirical Spirits start by growing their own barley and koji-kin to make koji (the base for sake and soy sauce).  This is combined with Belgian Saison yeast for fermentation to make a sweeter wash than the usual small beer of the whisky industry, for example.  The wash is then distilled, 100 litres at a time, in a closed vacuum still.  This allows for a much lower temperature, – 15°C, instead of the 85-90°C required in a conventional distillery, producing a lighter, softer alcohol, and enables greater preservation of delicate flavour notes.

Finally, the new-make spirit is cut fifty times.  That’s right, 50 times.  That’s a lot more than the traditional heads, hearts, tails of a whisky.  Williams likes to talk of the benefits of this being the ability to stretch the flavour. It allows Empirical to really familiarise themselves with each step of the journey, from first bite through to the last hint of the aftertaste, and discard the harsh “hangover components”, while retaining the parts that bring the most joy, or the best representation of a walk in the woods.

A smoked juniper spirit rested in Olorosso casks for five days and named for Drew Barrymore’s character in Firestarter. It tastes of dark, burnt oak smoke – like sticking your head into a long cold fireplace in the corridors of a dank and musty Scottish hotel.

Based on the distillation of a quince tea kombucha, this has a perception of sweetness (which gives it the My Little Pony reference – fallen because she couldn’t deal with her child stardom), a taste of marzipan fruits, predominantly peach, and Fruit Salad penny sweets.

As the name suggests, this spirit is redolent of a bustling Moroccan market place.  The predominant flavour comes from the use of Ras el Hanout (a traditional north African blend of ‘top shelf’ spices), gently softened with the addition of cacao shells.

Side Car Tour of London
From £60 / group

The centerpiece: a delicate, floral spirit made from fermented tuna.  Because why not?  Katsuobushi is a traditional Japanese product that is used as the basis of the dashi broth.  It starts with lightly simmered tuna fillets which are smoked for up to six hours at a time, day on – day off, for up to a month.  The smoked fish is then sun dried using – and those with a delicate stomach may want to look away now – a specific mould culture which ferments it.  After this, the fish alternates between further sun-drying and humidity-controlled rooms for four months until the fillets have reduced to around 20% of their original weight and are so hard that they have to be shaved on a wood plane before they can be used for stock.

Williams saw the umami rich and smoky flavour as a perfect whisky profile, and the Empirical distillate is rested for a shot period in Cognac casks to give it the necessary touch of sweetness and body, as well as allowing some of the fishiness to mellow.  The resulting product maintains a strong savoury taste with the natural comparison being a combination of fish stock and Laphroaig.

This delightfully named distillate is a habanero spirit that uses around a kilo of peppers per bottle.  Despite this, and the inescapable habanero nose, the taste is soft and sweet and most reminds me of melted green Wine Gums.  This is rather a disconcerting experience given that a kilo of habaneros sounds pretty painful. Fortunately, the capsaicin is too heavy to make it through the distillation process, so there is no burn. At all.

Named for “what is important in Mexico at the moment”, all profits are being sent to RAICES, Texas, a refugee and immigration charity.

So where can you taste these exotic products? A select few are stocked at experimental London bars such as Clove Club, Lyan Cub and Scout. Products are also sold in very small batches and at irregular intervals. These sales are usually announced via the brand’s Instagram feed (keep an eye out on Fridays) and sold via www.empiricalspirits.co.  Prices are from £43 a bottle, and batches are of no more than around 300 bottles, so if you want one, be quick!

Fan of trying out new spirits and drinks? Don’t miss Alex’s recent pieces on Woltz’s Rose Petal Vodka and Italicus Rosolio di Bergamotto! Get your shakers and mixing glasses out…