Easter Food and Traditions Around the Globe

The chocolate Easter bunny has become a modern symbol for Easter, but this religious holiday has a wealth of old traditions in many nations that are still observed and maybe even more delicious! Easter rituals around the world vary from eating sweet hot-cross buns here in the UK, to oranges in Norway and more strangely to rodent buffets (anyone up for it?) in Columbia.

To tickle your taste buds, we have compiled a list of Easter traditions, unusual customs and typical foods from countries around the globe:

Moldova – in our tiny home country of Moldova, Easter is the most important religious holiday in the Orthodox calendar. It is the time for family gatherings, celebrations and a lot of food, since Easter is the end of lent season! A game of egg-knocking is played – everyone in the family picks a hard boiled egg, chooses a partner and then they knock the eggs. The winner is the last standing person with a whole egg!

Greece – like in Moldova, Easter celebrations are a big thing for Greek Orthodox. In Corfu, locals throw pots onto streets and out of their windows to ward off evil spirits.

Germany – ever so present is the traditional ‘Osterhase’ (Easter bunny), a symbol which is actually believed to originate from Germany. Another tradition is the decorating of eggs, that are later hung on little branch trees, also known as the Oesterbaum.

Traditional Easter food: it is traditional to spend Easter Sunday with the family, starting out the day at church where you bring a ‘Gebackene Osterlammin’ basket, a baked cake in the form of a lamb. The lamb is placed on the steps of the altar and after the service, the Priest blesses the pile of baskets and this is taken back home to share with the family, normally on Easter Monday. 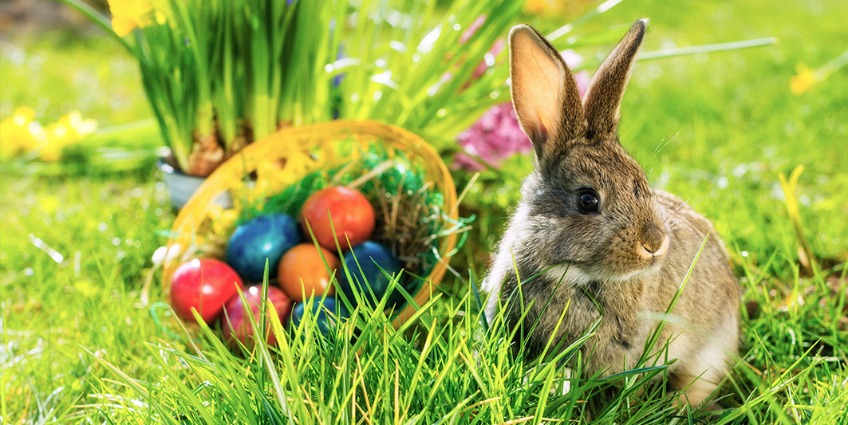 Photo credit: Focus on the family

Italy – on Easter Monday, some Italian cities hold free concerts or funny games often involving eggs. In the Umbrian town of Panicale, cheese is the star, where men play the gam of  ‘ruzollone’ by rolling huge wheels of cheese around the village walls.

Traditional Easter food: lamb or goat and special Easter breads that vary from region to region. Pannetone and Colomba (dove shaped) breads are often given as gifts, as are hollow chocolate eggs.

France – the traditional Easter bunny is not common in France, except for Alsace. In France, Easter celebrations are marked with the ‘April fish’, which makes its appearance on 1st of April or April’s fool Day. The children play tricks with the paper fish by secretly sticking them on to people’s backs.

Traditonal Easter food: like many others, the French prefer to serve lamb at Easter and eggs.

Hungary – the Hungarians celebrate Easter with an old pagan tradition of ‘Easter sprinkling’ that was believed to improve fertility and involved men pouring water over women. Nowadays, the water has been replaced by perfume, which is sprayed on women’s hair. 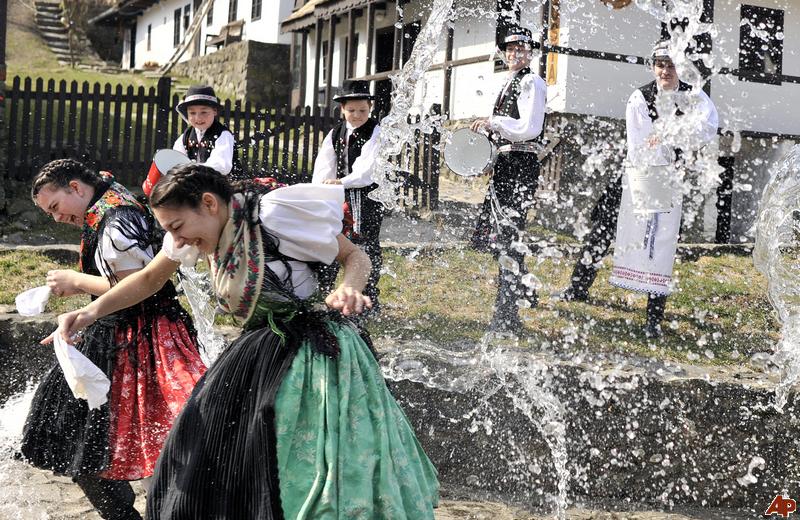 Norway – ‘Passkekrim’ involves a game of solving crimes – quite an unusual way to start the Easter celebrations! During Easter even the cartons of milk have mystery murder stories on their sides.

Traditional Easter food: funny enough, the Norwegians food of choice at Easter is something that does not even grow in their country  – oranges, that are eaten raw or baked in cakes.

Australia  – Easter is usually associated with spring and new birth, but in Australia, Easter is celebrated during autumn and associated with the golden hues of trees. Also, unlike many other countries, the rabbit in Australia is not considered as an Easter symbol, as it is often responsible for agricultural destructions. Therefore, the Australians came up with their own Easter animal – Bilby, an endangered marsupial with rabbit-like ears.

Paraguay – like in other countries, Easter is very family centric. One funny Paraguayan tradition is that is is customary to play lightly spanking the kids in the bumm and saying ‘Pascuas’. This is to make up for the fact that on Holy Thursday and Friday it is not allowed to punish children, speak loudly or listen to music, all of which are allowed once again on Easter Sunday.

Traditional Easter food: eating chocolates is very important during Easter Sunday celebrations, families gather and give out chocolate eggs to each other; there is normally one huge chocolate egg in the middle of the table that is broken and shared at the end of the meal. One traditional Paraguayan food that is prepared and given out on the days before Easter is ‘Chipa’, baked cheese-flavoured rolls, that during Easter are baked in animal forms to give out to neighbors, this is known as Chipa Lopi in Guarani.

What are your Easter traditions? Share them with us on the comments section below 🙂