What are the key styles of beer (and how do I find one I like?)

Let’s take beer back to basics. Like, right back. If you’re not sure where to start, here’s a brief outline of a few of the most commonly seen types of beer to help you navigate all those taps and pumps at the bar.

Many modern examples are influenced by the craft beer movement. The American pale ale is a great style to start exploring. It boasts crisp light malt flavours and pronounced fruity hops without being too bitter. Brick Brewery’s Peckham Pale is a wonderful example.

These may seem a world away from more traditional ales, like a pint of English bitter, where the balance lies more towards the toffee malt flavours, but essentially they’re just different expressions of the same drink. If you want a trad pint, Harvey’s Sussex Best or Timothy Taylor’s Landlord can be hard to beat.

Craft Beer and Food Tasting Tour in…
From €65 / person 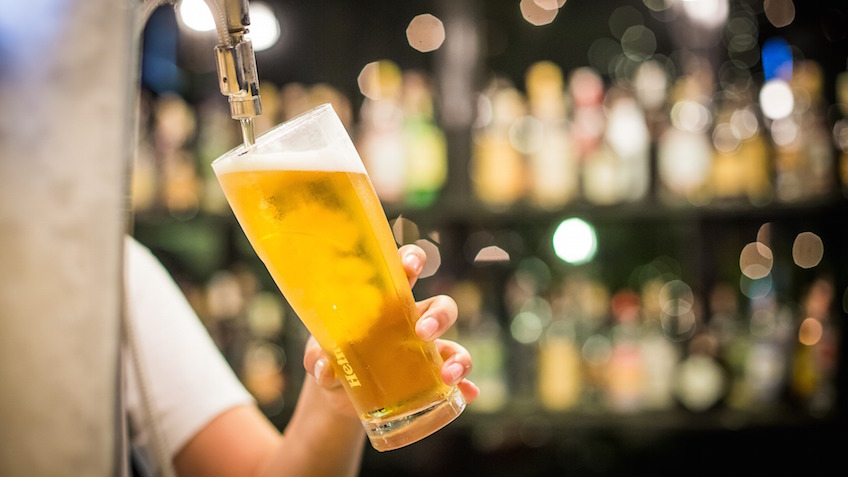 IPA stands for India pale ale. These beers are light, hopped up, and higher in alcohol than the pale ales that came before them. Originally created to withstand the long sea voyage from England to India, the style quickly became popular here as well. It’s really taken off in the last couple of decades, with the advent of craft brewers making the style their own.

IPAs from America are what kicked craft beer off over here. Juicy tropical flavours dominate, but they can in turns be floral, peachy, piney, or dank and skunky. Cloudwater in Manchester produce a great and ever-changing range of fresh, seasonal IPAs. Or try Fourpure’s Shapeshifter and Beavertown’s Gamma Ray; both are stalwart IPAs you can depend upon day-in-day-out.

Lately the craft beer world has been enthused by New England IPAs. Are these a sub-style of IPAs, or are we witnessing the birth of an entirely new beer style? No one quite seems to know. NEIPAs are hazy and opaque, often looking like a glass of orange juice topped with a head of creamy white foam. Brewers use new-world hop in such a way as to reduce the bitterness and bring the juicy tropical flavours to the fore. The results can be truly delicious: silky soft with exuberant fruit. These beers are made to drink fresh, so are fleeting by nature. Any particular one I recommend here may be gone by the time you read this.

A stout is technically still an ale, but is made with more heavily roasted malts giving it a darker colour and a deeper flavour than those we’ve seen already. There are a few types, but what they all have in common are roasted, toasted notes of coffee and chocolate, with dark red fruit lurking beneath the surface.

Everyone knows Guinness of course – a typical example of an Irish stout. These tend to be quite light and dry, and are a superb match for oysters. Stouts can be sweet too, particularly milk stouts which are brewed with lactose for extra sweetness and a smooth body. Wiper and True’s Milkshake is a fine example. Or try an oatmeal stout, like the one from Samuel Smiths.

As they get stronger, like the Kernel’s Export Stout at 7.2% ABV, dried fruit or rum and raisin characters come to the fore, with vanilla and espresso coffee notes finished off by alcohol warmth. For me this is where things get really interesting. Darkly boozy stouts with an inky velvet texture are great for a winter’s night, if not so good for the morning after.

What about wheat beer?

All beer contains grain. Usually it’s barley, but adding some wheat into the mix will give a fuller body and a good head of foam. It can also produce a certain citrus sharpness and make the beer hazy when used in large amounts. Hitachino Nest White Ale is brewed in the tradition of a Belgian style white beer with coriander, nutmeg, orange peel and orange juice – delicious!

Towards the light: lager

Lagers are brewed colder and slower than ales, using a slightly different yeast, and they are conditioned for longer too. As a result, the yeast character is almost entirely removed from the beer putting the focus squarely on the pale malts and the subtle hops used.

A well made lager is a wonderful beer: light, crisp, and refreshing. Sadly there’s a lot of crap lager around, to the extent that mass-produced lager has become the epitome of Everything That’s Wrong With Big Beer. Your best bet is to stick with the OG Czech and German lagers. Pilsner Urquell literally means ‘the original’, and after 176 years it still hasn’t bean beaten. If you can find it in a cask it’s even better.