Is it Whisky or Whiskey: What’s the difference?

If you’ve ever thought about investing in wine, you might also have considered investing in whisky. Before you do however, there a few terms you need to be clear about…

Is it whisky or whiskey? The short answer is that it’s both! It’s spiritual home Scotland, Canada and the rest of world use the term ‘whisky’, but America and Ireland prefer ‘whiskey’. Irish settlers took ’whiskey’ to America in the 1700’s, where the term has been used ever since.

Why do both term exist? Whisky and whiskey?

The reason for the difference is two translations of the Irish and Scottish Gaelic words for the spirit. In Scotland, it’s uisge-beatha and in Ireland, it’s Uisce beatha. Whisky and Whiskey are the anglicised forms of each. 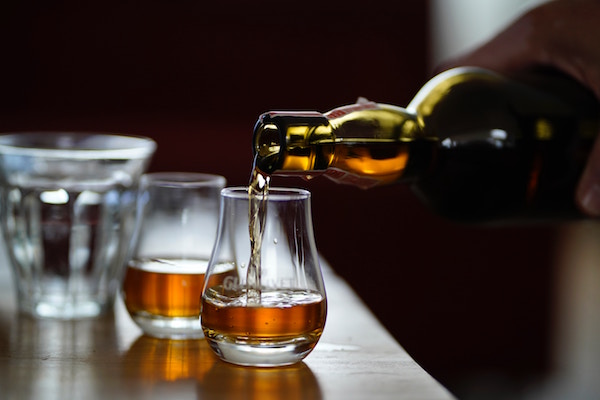 Put simply, whisk(e)y is a spirit distilled from fermented cereals, which is then aged in wooden casks. Geography, types of still, water, levels of peat, cask types and ageing time all make a difference.. Here are your need-to-know classic styles:

Whisky can only use the term ‘Scotch whisky’ or simply ‘Scotch’, if it has been distilled and matured in Scotland for at least three years. It’s made with malted barley and usually bottled to at least 40% abv. It is Scotch whisky that sets the benchmark for all other whisky styles around the world.

Irish whiskey is distilled three times instead of twice, which is why it is usually lighter than Scotch. It also tends to be softer and fruitier in style.

Canadian whisky is also light and dry because instead of being made with malt, rye is used.

Japanese whisky is the style that is most often likened to Scotch, though their distilleries are also produce other styles.

American whiskey is generally quite different in style to Scotch as it can be made using several different types of grain. For example, corn whiskies such as Bourbon and  Tennessee whiskey are often woody and fairly sweet, whereas American rye whiskey, can be more spicy and pack a bigger punch. Some are also blends of all these grains.

Indian whisky is a slightly different style of whisky again, but one to definitely watch out for. It is produced with the addition of molasses and has rum-like flavour profile.

Blended, single malt or grain whisky. What is the difference?

Just like with a single wine estate, single malt whisky is made purely with malted barley from one single distillery. Grain whisky uses any other cereal, such as rye, corn or wheat. A ‘blended’ whisky refers to a blend made up largely of grain spirit with some malt whisky and the majority of whiskies you can buy are these. However, look out for  ‘vatted’ or ‘blended malt whiskies’ too, which are a blend of two or more single malts. This is a very rare style though, which just make us want to try it more! Hmmm now I’m thirsty…